2009 will always be remembered as the Golden Year of Toku. Why? Well, we got an amazing season of Power Rangers, an American Kamen Rider adaptation which kicked major ass, a Sentai that is really good to some, and two Japanese Kamen Rider series that both rock! And so in honor of this, a music video was done which I must say the music video is outstanding! Have a Happy New Year Everyone!

Wanna know what I got for Christmas? Try to guess.

If you guessed Kamen Rider Dragon Knight the video game for Nintendo DS then you get a cookie! =D but that's not all I got! I also got Kingdom Hearts 358/2 days, a new cellular device, and moneys! This holiday rocks so far! Anyways, I hope everyone has a great holiday like I am so far!

On a side note, I will probably not make another video till 2010. Who knows? But right now there is a chance that you might not see a video from me till 2010. Maybe some Goggle V and Turboranger Episodes, but no new video. Sorry. But enjoy the winter break! =D
Posted by Kingdom Rider at 11:19 AM No comments:

Please be aware that this finale will NOT happen! If you didn't read about this on RangerCrew or HJU, then this is something you'll want to check out.

The finale was "Ranger Black," where after Venjix is destroyed and Summer finally chooses which boy she wanted to be with, the sleeper programming in Dillon activates. The memories of he and Tenaya together were falsified and meant to lead the Rangers into taking him into their ranks and allowing him greater trust. Dillon NEVER EXISTED AT ALL. Now it falls to the rest of the team to destroy Venjix once and for all, even now that he controls the Morphing Grid.

If you ask me, I think his finale sounds a bit better than the one we're getting now. Sure, we probably would've felt cheated by having Dillon and Tenaya NOT related to eachother. But still, was anybody surprised when it was officially announced that the two are related? Anyone? Exactly. Eddie probably wanted to try to make us think that the two are siblings and in the end, it turns out that they would be no relationship between the two. Any thoughts on this?
Posted by Kingdom Rider at 5:25 PM No comments:

Grr! For some reason this will not let me upload on YouTube so I uploaded it here. This is a mini Shinkenger Tribute made by me. I hope you all enjoy it. I used clips from the first two episodes, which is why this looks more like a fan-made opening than a tribute. But anyway, I will make a new version with more clips and it will be longer when the single for this song comes out. Hopefully it will be on YouTube instead of here. The song is called "Kimi Gai Inai Mirai" by Do as Infinity. Yes! It's from InuYasha: The Final Act! 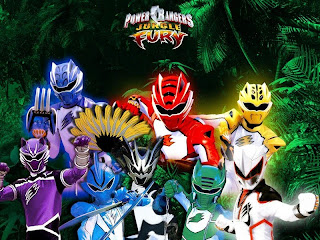 Yeah, I'm just as lost as you are. According to Sungei Wang's website, Power Rangers Jungle Fury is getting a movie. Read for yourself if you don't believe me.
http://www.sungeiwang.com/promo/concourse_PowerRanger2009.htm

How? I don't know. Why Jungle Fury? I honestly don't know. If any PR series, it should be Time Force, Dino Thunder, or RPM! Anyway, I'm not sure if I want to believe this because Disney didn't have enough money for anything for Jungle Fury, no team-up, no battlizer. Bandai America sponsored for the Spirit Rangers. RPM had the lowest budget ever, and it went over budget. And even if Jungle Fury was getting a "movie," it's probably going to be three episodes combined to make a movie like what they did with Mystic Force. I'd probably watch it, maybe it would be better than the series itself as long as Kalish wasn't producing it.
Posted by Kingdom Rider at 6:33 PM 1 comment: