I'm alive , & still active if anyone was wondering . Hehe just having really been on this in a while & wanted to do a post to let all of you know that I'm still alive and still active in the Tokusatsu world . It'll be rare for me to post about things , but this probably won't be the last post I'll do , like the last time . Hehehe ;)

http://www.facebook.com/sammedinasaur
Posted by Kingdom Rider at 11:09 PM No comments:

It happened at least two days ago. I received copyright claims from Toei for using their material in the MVs I made. I guess you can't even make MVs on YouTube anymore. So, my main one, and my two other ones are gone forever. I haven't exactly made a new one lately cause I've been so worked up. If I ever do, I'll make a shout out.

Also, my blog got messed up as well, the same day my YouTube accounts got terminated. It wouldn't let me sign in, and said that my blog was terminated, but I just recovered it today so everything seems fine for the moment.
Posted by Kingdom Rider at 5:20 PM No comments: 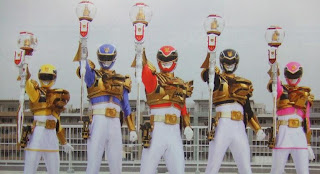 24 votes total. Poor Fiveman, it's the least popular series. Zyuranger seems to be quite popular though. I voted for Megaranger. That goes as my second favorite Sentai season, behind Boukenger.
Posted by Kingdom Rider at 10:23 PM 2 comments: